That didn’t sound too hard, but ended up taking me longer than I thought. I wonder if others might have a more elegant solution than mine.

The method I used involved:

Here’s what I did for the “DateTimeInSeconds” part (also a subroutine, included in the attached strategy):

Thanks Mary. I took your code and put it in a chart to calculate the time difference between a Start event and a Stop event. It also includes the conversion of the time difference which is in seconds, into a string format. All the code is in the chart, no subs. Attached is the export file.

This popped up on the OptoNews email so I though I would comment.

Your leap year check won’t work for they year 2100 and every 100 years after that, unless of course it is divisible by 400 … why can’t the earth go around the sun in a nice even interval???

Another way of doing date/time arithmetic:

You can use the DateTimeToNtpTimestamp() on Opto DateTime data types (the integer table used for all the date time commands). Then perform the math on the NTP timestamp and convert back when done - just have to watch out for the fractional seconds on the timestamp. Good for up to a 68 year difference, but I haven’t tested it on anything that large.

Hopefully the DateTimeToNtpTimestamp() doesn’t have any leap year bugs

Thanks, philip! Yes, I wish we could fix that pesky ol’ earth revolving around sun problem. Thanks for catching that error! At least it won’t show up in any strategies in our lifetime(s) (well, maybe?) although that’s a little sooner than how long it took the Vatican ([U][B]350 years[/B][/U]) to admit Galileo was right about that whole earth moving around the sun thing, but I digress.

In any case, I’ve not done much with the Ntp stuff (don’t worry, I didn’t write that code!) – but perhaps there’s a better way to do this elapsed time calculation using those commands? Although, I notice the help for “Convert Date & Time to NTP Timestamp” says it’s only good from Jan 1, 2001 through Dec 31, [B]2135[/B] so you’d only be okay for another 35 extra years anyway.

heavy sigh Hopefully we’ll all be sipping half-full margaritas by then and letting the next generations sort out all these little details.

Revised DateTimeInSeconds subroutine code - fixes leap year issues and a bug in the nDaysSinceYearStart for loop:

One last thing is on the human readable form:

If we divide by the fractional year - 365.2425 as Mary’s strategy is sort of doing (using the less precise 365.25), then you’re going to get a result that is not equal to one exact year in either case.

I would probably just stick to total days and not worry about displaying years, but it will of course depend on the application.

Perhaps this is a solution looking for a problem?

This is great! I have been reading lots of posts and bookmarking and saving posts. This is a great start to my problem, and I hope you can help.

My issue is, how do I calculate, and I quote from the specs:

“…a 60-bit timestamp, being the number of 100-nanosecond intervals since midnight 15 October 1582 Coordinated Universal Time (UTC), the date on which the Gregorian calendar was first adopted.”

This code provides the elapsed years, days, and HH:MM:SS, from a given date. How would you calculate the needed 100-nanosecond intervals from 1582???

PS
Loved the training class and meeting you this past Oct. Tell Norma I said hello!

The time function resolution is 1 msec. That doesn’t mean it won’t work, you just have to either make sure you don’t build two UUID during the same system time interval (using a delay?) or you can sequentially add to the time stamp (up to 10,000 UUIDs per ms time interval). (Section 4.2.1.2 of RFC 4122)

If you are not generating a lot, just put in a delay of 1 msec after each UUID generation. Are you putting this in a subroutine?

Thank you Phillip for a quick reply.

I would like to put this in a subroutine. I am creating records that I am writing to a file, each record will have a UUID. So, calling a subroutine is the way to go.

The problem is, I do not know how I would calculate the time component for the UUID.

Do a search for the word ‘Gregorian’ in that doc and you will see your spec.

So yeah, between those two, just follow the spec and use 1ms resolution and put a delay between creation of UUID’s and you are all done.

Thanks for the clarification. I see now what Phillip was talking about. I am still unclear, and do not know how to code in opto-script to get the 60-bit value from the timestamp. Is it possible for you to provide a code sample?

This is an epoch problem. (Hopefully you will catch the humor in that)

Opto has a command to give you an NTP timestamp - the UUID version 1 algorithm has its own kind of timestamp (UUID timestamp).

NTP timestamp is a 64 bit value - top 32 bits are seconds since 01 January 1900 (called the NTP epoch) and the lower 32 bits are in fractional seconds (they will run through the entire 32 bit number space every second - yikes).

UUID timestamps are 100ns intervals since 15 October 1582 (UUID epoch and the start of the Gregorian calendar) stored in 60 bits.

So with a bit of bit shufflin’ you can convert from one to the other:

From there you can convert the n64UUIDTimestamp to a hex string and tear it apart to build the top 64 bits of the UUID.

You will need to store a copy of this timestamp in persistant storage along with a clock sequence number that is initially generated randomly. The next timestamp you generate, if it is less than (or equal in my opinion) than the one stored, then you need to increment the clock sequence #. This is to ensure uniqueness after a clock change. The clock sequence is part of the UUID as well along with the ethernet MAC address which you already retrieved. This is all documented in the RFC.

That is outstanding! At this point in my opto22 development, I could have never figured this out. Thank you for the help, and documentation.

In the various programs I have seen on this forum, I didn’t see where you manage the changeover from summer time to winter time or vice versa?
This is an important point because there may be a delay of one hour or an extra hour in the recovered data.

Thank you in advance,

The answer is here; 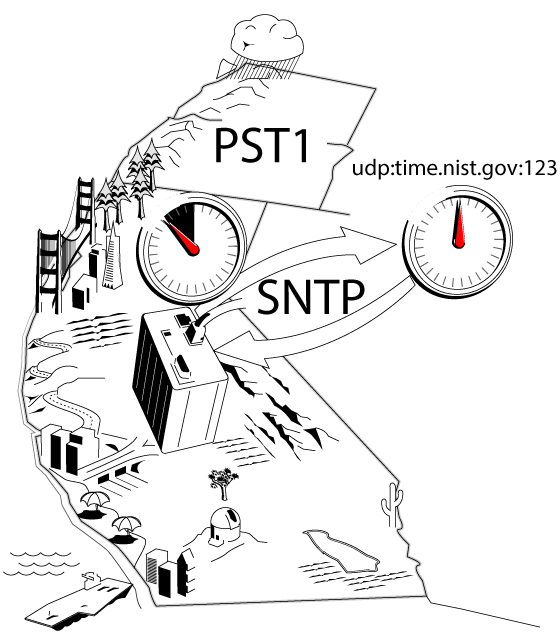 How to set the clock on a PAC Controller

I gave things a good try at understanding before jumping in with my question, but here goes

I want to estimate when a test, that contains many sub-steps, of which I know how many (int32-scope) seconds each will take, will end, and be able to display the time and date the test is predicted to end.

We are talking in the neighborhood of 1,000 to 2,000 hours per test. Each test has either 40 or 80-ish cycles, each cycle happens to always add up to a days worth of time.

What I have done so far:

Have you considered just using the DateTimeToNtpTimestamp and NtpTimestampToDateTime built-in commands? You would need to convert your date/time string to the Opto date/time table format, but then you could use a built-in function that is supported.

If you already have a lot of invested code written based on the above, then you could also convert time format to an Ntp Timestamp and then use the NtpTimestampToDateTime. You will need to perform an epoch conversion by adding the seconds from your epoch of year 0 to the NTP epoch of 1/1/1900 (just pass 1/1/1900 into your subroutine and use that result), and then bit shift that value over 32 bits to get it into a Ntp Timestamp (you will lose some of the bits in the upper 32 bits, because of NTP timestamp rollover - but that is okay in this case). You can then pass that to the NtpTimestampToDateTime and build your date/time string from the opto time table. If it were me, I would just use the Ntp commands all together and not the subroutine above.

Thank you Philip I’d do the above with NTP stamps as suggested. At first I thought using them would require a major re-write of some stuff, so I started in on the subroutines I outlined above. I’m realizing now I can make much shorter work of the task with your suggestion, so away we go!

Just to be clear, I’ve dropped my own subs since I wasn’t THAT far into things, and I am picking up the idea of using the NTP to/from functions, and adding my calculated number of seconds to the current/start times to get the predicted end times.

I would have to take an int64 with a number of seconds in it (that I’ve made) and bit-shift it 32 bits over still, correct? THEN I could add it to my int64 output from the NTP function of the start time. If I didn’t I’d be adding my seconds to the lower (fractions of a second) portion of the NTP seconds, correct?