I am currently using 3 different communication handles to connect to the same FTP server at different points in my strategy. However, suddenly I started getting error -9 on one communication handle “Timeout, No response from device. Check hardware connection, address, power, and jumpers.” and on the other started receiving this when I am on Debug on PAC Control and try to open a connection: 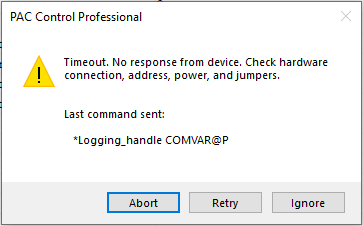 Thank you, would you mind elaborating more on that tip? Am i correct to understand then that the connection to be opened, stay open, and then close when done? Does this apply the same when communicating with the internal storage (sending and receiving tables)?

As per the manual. 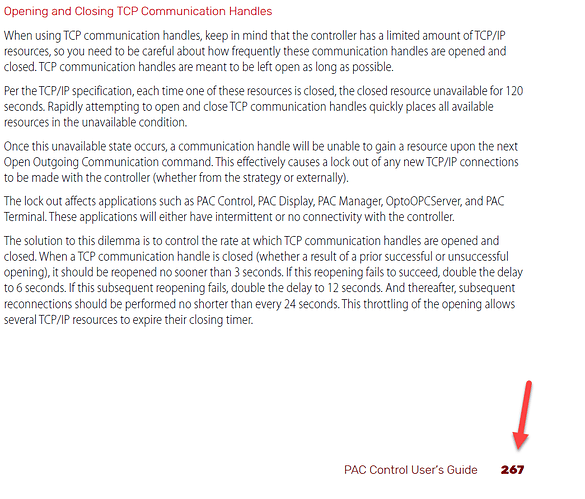 So yeah, you really should have only the one chart open it, keep it open, handle the other charts data requests to the FTP server, keep the connection alive (ie, ‘ping’), test the connection now and then to ensure its open and all good. It should only be closed if you know you are going to write anything for another x-minutes. x depends on a lot of things, but I’d say over 15 minutes.

@philip has some real world experience here. Most of my FTP server work was in the same room (different PC, but on the same switch).

Local will depend on how your writing the data. RESTfully? Node-RED vs PAC Control etc.

Leaving the connection open is only for TCP comm handles for the reasons Ben has mentioned. Usually, if you are closing the connection properly you will be able to reconnect again shortly, but if the connection is getting dropped (like stopping the strategy or chart without the connection being closed) then the other side of the TCP connection (the FTP server) will not know it. This can take 10s of minutes for the TCP stack to figure out.

Also, many (if not all) FTP servers limit how many connections can be made from a single client/IP, so they are more strict than the TCP stack on the device they are on.

I ran into this very issue with the Modbus driver in Ignition. It is very aggressive with reconnecting when a connection gets dropped, as it attempts to reconnect every second. Some of the modbus devices that are connected to it are over connections that are not always reliable, a lot of dropped packets and lost connections. Many Modbus TCP devices don’t have a lot of resources available and can only have a few simultaneous connections. In this case the modbus devices were unaware that some of the connections are no longer alive (google TCP dead peer) and would refuse new connections.

on the other started receiving this when I am on Debug on PAC Control and try to open a connection:

This makes me think you are opening and closing the connections quite rapidly to the point where your computer can no longer connect to the controller because the controller is out of resources.

Thank you for looking into it. I will go ahead and modify it with a delay and avoid this rapid opening and closing connection.
I have tested again after we restarted the FTP server and it was able to finally connect and transmit a table.